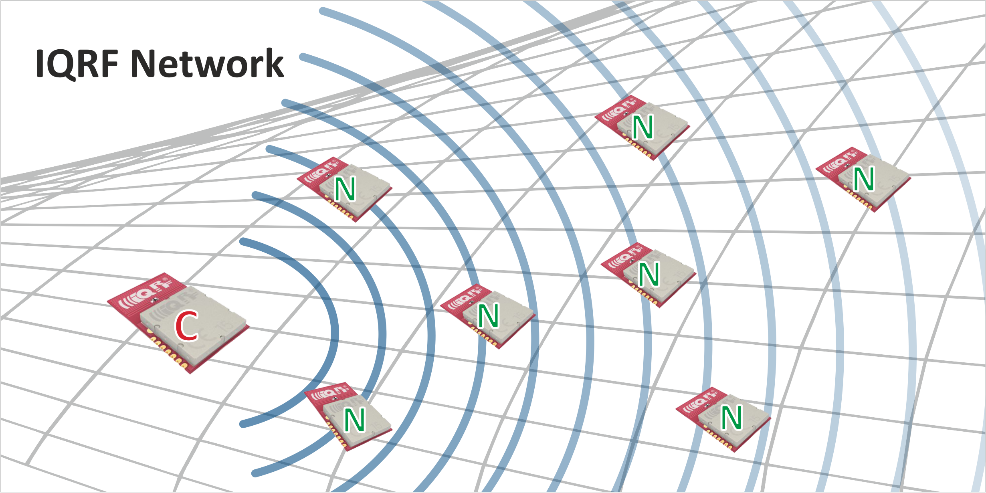 IoT is a great solution for industrial applications where there are devices installed in the field, in buildings, lights or in the streets. These devices need monitoring and managing, gone are the days of routine check on equipment, IoT allows the devices to monitor themselves, pass back usage and status data. This data brings low maintenance costs and much better control.

To work properly IoT needs a constant stream of communication between devices and your office. RDS is proud to introduce a new technology called IQRF. IQRF is a new wireless technology using radio frequencies (RF) in sub-GHz ISM bands. It is intended for general use where wireless connectivity is needed, either point-to-point or in complex networks, e.g. for telemetry, industrial control, automation of buildings and cities and of course the Internet of Things.

Developed in Europe, this wireless technology works in a MESH topology on an unlicensed free band and, thanks to its unique routing, can transmit data even in problematic environments.

Because IQRF® works in a MESH network, in which all devices repeat the transmitted message, there is a high probability that the message will reach the furthest points of your network. So, if you need to collect data or control your IoT devices in an environment where it would otherwise be difficult to provide coverage with other technologies, IQRF® is definitely a great choice.

For collecting small amounts of data, which is usually sensory or status values ​​from the device, or for remote control of devices, a transfer rate of 20 kbps is fully sufficient. The technology is not intended to transmit large volumes of data, but IoT devices don't usually need it.

The advantage is low power consumption, especially because IQRF devices can be put in a sleep mode and thus save energy. Thanks to precise "sleeping", the devices can awake exactly at the time when you plan to read data or communicate with them. Despite their low power consumption, IQRF® transceivers are capable of covering large areas - an area with a radius of many hundreds of meters in open space. When you multiply that range by a number of IQRF transceivers in your network (which may be over 200), the range can span a few tens of kilometres.

Data transfer is secured using AES-128 encryption, the selected data can also be encrypted for transmission outside the IQRF® network, using functions built into the embedded operating system.

IQRF® can be used to transmit data from indoor air sensors, occupancy sensors in parking lots, for lighting inside large buildings or for street lighting. It is often used in industrial applications where it is chosen for its reliability and safety.

IQRF also has a flexible Network architecture which uses a gateway to communicate with common computer networks. The gateway translates proprietary communication from IQRF network to TCP/IP networks. The gateway can work standalone or connected to the cloud to send data from the IQRF network or it can be remotely controlled via the cloud application. This architecture means any remote connection failure will allow the local IQRF network functionality to continue until main communication is restored.

IQRF is an open standard, manufacturers can certify their products for IQRF Interoperability in the IQRF Alliance to ensure their devices can easily be integrated into complex networks. Unified and predictable communication with such devices makes creating a complex solution a matter of hours instead of months.

You can read more about IQRF® features, IQRF Interoperability and use cases in the next chapters of this series.