So you need a tablet for an industrial application, should you buy an Apple or Samsung?

Apple and Samsung type consumer tablets are goof but are just not up to the task when it comes to industrial applications. 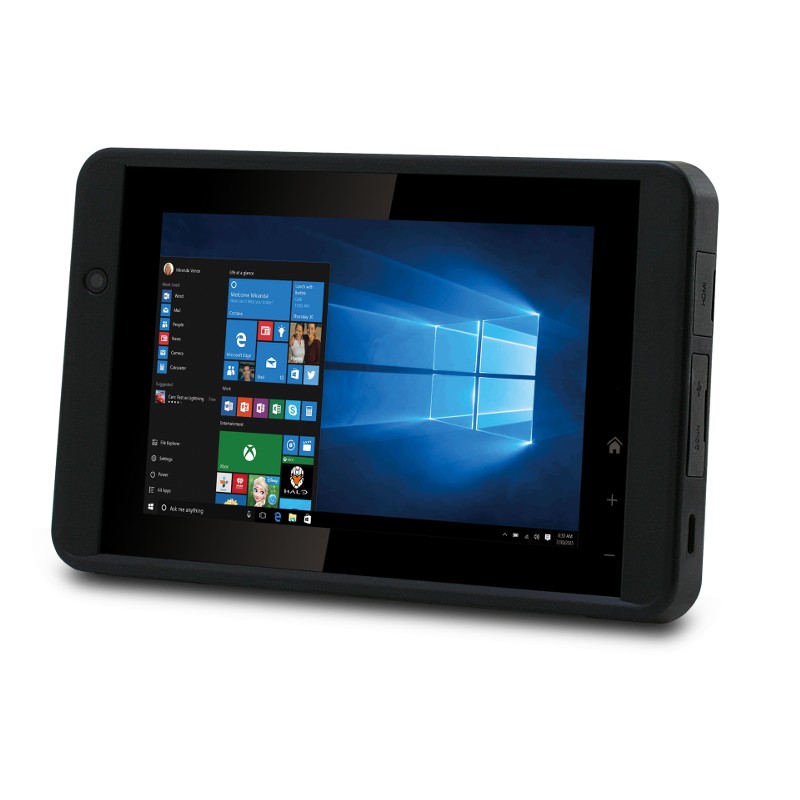 So you need a way to capture data in the field, you need a mobile device running Windows or Android for data capture and monitoring. Many people faced with this requirement immediately look at consumer grade standard tablet Computers. Standard Tablet Computer (STC) such as a Samsung tablet, look great, are easy to obtain and are cheap. Buy a few of these; give them to your staff with a bit of software on them and away you go – job done. It is very tempting to do this but as I will explain it is a false economy and you will open yourself up to a load of problems you didn’t think about.
A decent 10.1 inch Tablet costs around £300, is lightweight, easy to get and are easy to setup your own Windows or Android apps. A Rugged Tablet computer (RTC) costs £700-£1000, is a lot thicker and heavier and can only be sourced from a few suppliers. Why choose an RTC over an STC?

A shipping firm in Africa needed a way for staff to walk around the dock and monitor containers. The staff needed to check cargo numbers as they were unloaded. They decided to use locally sourced consumer grade tablets. These were bought and loaded with the docks application and given to staff. Job done! It worked for a while until two of the tablets went “missing” after a week. These were replaced (took a week), shortly afterward one developed a fault on its charging port because the staff were not careful when plugging in the chargers, another was dropped and broke the screen. These units were sent off for repair under warranty leaving only three working devices. It took five weeks to get the units repaired.

During operation several staff complained the screens weren’t bright enough, being Africa it was very bright outside and their tablets were difficult to read in direct sunlight. Several of the devices shut down when they got hot, staff managed to work round this by trying to keep the devices in the shade. Several of the devices developed faults in operation which was traced down to staff installing games on the devices which interfered with normal operation. Staff wanted to scan the bar-codes on some of the containers and so separate scanners were needed, the tablet they had did not have a full sized USB port so two new different units were bought with full USB sockets. This meant staff had to carry two devices around and more tablets were broken due to staff dropping the units. Cases were bought for the devices to try to protect against drops. The charging connector on the tablets was a constant source of problems and more tablets had to be bought since the repair turn-around could be months. This meant always having spares units doing nothing in case of failure. The batteries did not last all day, some busy days the units ran out of power and so had to be left in the office to recharge, this meant buying more units and leaving some on charge.
The advantages of buying consumer grade products is mainly price, but in the example above the initial price is only one aspect of the overall Cost Of Ownership (COO). If you add up all the costs involved in this example you can see that the initial purchase price of the units is only a small part of the true costs.  Five units were needed, customer bought two extra with full USB ports and 3 extra to allow for repairs and battery issues. Meaning in effect the customer had to buy 10 units to ensure 5 were operational at all times. Any additional features that were required meant buying new tablets.
Additional costs are:
Shipping back and forth for repairs.
Additional purchases for new features and spares.
Additional units to allow for battery longevity issues.
Lost productivity due to units out of action.
Additional protection.
Anti theft costs.
IT costs for fixing software issues caused by staff tampering.
Reductions in productivity due to tablet limitations such as temperature and screen brightness issues.
Buying new units to get new features.
It’s difficult to add up all these costs but it is easy to see that the £300 retail price is easily doubled if not trebled to get the real cost of ownership.

RTC-700A
The customer bought 5 of the 7 inch RTC-700A units from AAEON which cost approximately £700-£800 each. These units are designed for industrial use, have higher range of temperature operations and hot-swap batteries. Additional docks and bar-code scanners can be bought later IF and when required without changing the original units. The 700A is much less likely to be dropped or stolen (does not have access to the Google apps store by default), is protected in case of drops, has full size USB ports, hot swap batteries as well as a range of add-ons. This unit has already saved the customer countless hours of productivity, reduced installation and operational costs and generally saved time and money on repairs and maintenance.

RTC-600A
The AAEON RTC units come in 5.7 inch, 7 inch, 10.1 and 11.9 inch units. The larger units can run Windows as well as Android and have a range of options such as WI-FI, 3G, Bar-code readers, docking stations with extra ports.
If you would like to know more about our range of rugged computer equipment please contact RDS on 01959 563 345. WWW.REVIEW-DISPLAYS.CO.UK